June 27, 2020
The NWSL Challenge Cup began with a 2017 and 2018 Championship rematch between the North Carolina Courage and Portland Thorns FC.
Before the game began, both clubs kneeled during the national anthem while wearing Black Lives Matter shirts in solidarity with the movement sweeping the US. The teams then took a knee on the pitch before kickoff. Both clubs also dawned black armbands during the match in support of Black Lives Matter. 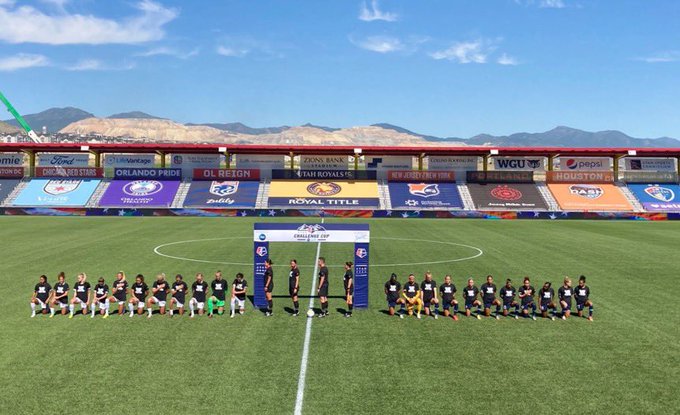 The score stayed 0-0 until the 75th minute when Hailie Mace put in a cross that Debinha put in the back of the net. Portland responded just five minutes later in the 80th minute with a Simone Charley goal. In the 94th minute of the match, Sam Mewis dribbled down the right flank and put in a cross that Lynn Williams converted for the game-winning goal. Both cited their connection as roommates during quarantine as a builder of chemistry for the goal. The game ended in a 2-1 win for North Carolina. 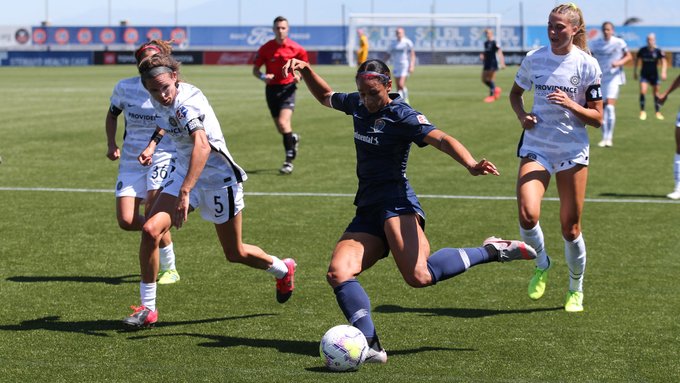 The game was slightly under the usual standard of an NWSL game because of the lack of a proper preseason and shaking off the rust. We also saw that in the return of soccer leagues across Europe. In the first twenty or thirty minutes of play, it was evident that the teams were getting their nerves out, but the game settled in and both sides began stringing passes together.
The Thorns and Courage seemed to struggle to get their rhythm back in full 11v11 competition against unfamiliar teams. Obviously, they haven’t played in true games since last October due to the coronavirus pandemic. The match didn’t have the same physicality as we’ve seen in matchups between these two teams in the past, but that’s understandable because of the fatigue both sides must have felt.
North Carolina did start to find their tempo towards the end of the game and fall into their style from last year. They employed a quick press after losing the ball for the entirety of the match. Portland, on the other hand, never really seemed to get a rhythm or a dominant style like they tend to have. This could be the ripple effect of having nine players leave, eight new players come in, and the simple lack of time to form chemistry. The Thorns were also missing Tobin Heath, who is commonly regarded as a maestro on the field.
The Portland Thorns gave Bella Bixby her NWSL debut and the start over Britt Eckerstrom. Overall, I think that she had a very strong showing for the club. Bixby made multiple quality saves and used her six-foot frame to stop North Carolina’s aerial balls. 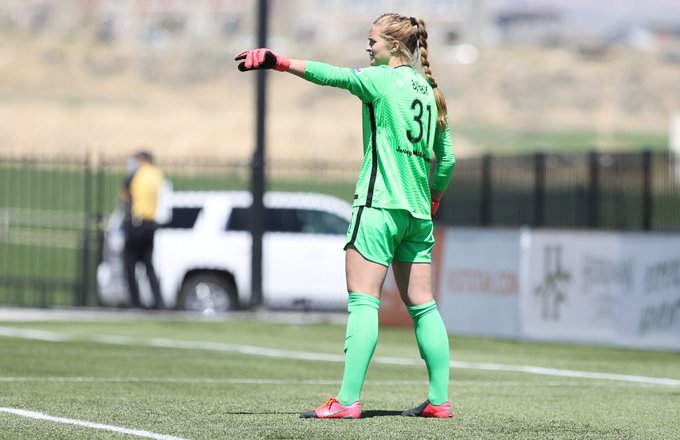 NC Courage’s Lynn Williams received the Budweiser Woman of the Match Award. She scored the game-winner goal for North Carolina and also had a few scoring chances in the game. Williams remained persistent in her pressure of the Portland defense during the match, despite the heat, altitude, and lower level of fitness,
Unfortunately, there was a scary injury sustained by Ally Watt of the Courage. As of now, there is no official word on her condition, but Paul Riley did say that it, “looks like a knee.” The injury was sustained without contact. Lindsey Horan also looked to have sustained a head injury towards the end of the match but did reenter the game without cause for concern.
The Courage will face the Washington Spirit and the Thorns will face the Chicago Red Stars on July 1.

Popular posts from this blog

The Effect of the Black Lives Matter Movement on the NWSL

June 30, 2020
It has been 36 days since May 25, the day that ignited (not started, but ignited) the Black Lives Matter Movement. Millions across the United States have taken to the streets of our cities to protest police brutality and racism. People have used their social media to spread awareness for Black Lives Matter. Millions and millions of dollars have been raised to support this important movement. Among the supporters across America are the athletes of the NWSL.
NWSL players across all nine teams have used their platforms on social media to support Black Lives Matter and spread information. Many players took part in posting a black screen on Blackout Tuesday, which happened on June 2. Players have also released many statements in support of Black players and this movement. Some members of the NWSL clubs took part in peaceful protesting as well. One example of the players taking action in their communities has been the North Carolina Courage players’ auction. They are using their platforms to…
Post a Comment
Read more

Who Can Threaten The USWNT's Throne?

June 27, 2020
The United States women's national team has been absolutely dominant in women's world football since its founding. The United States continued to be dominant on the world stage at the 2019 World Cup and seemed to be the top contender for the 2020 Olympics before their postponement. With stars like Alex Morgan, Christen Press and Tobin Heath in their primes, the US does not look like they will be stopping their winning ways any time soon. The future for this team also looks very promising with young players like Rose Lavelle, Lindsey Horan and Mallory Pugh lined up to lead the team in the future. The younger generation of players has shown their strength on the field already and once they reach the primes of their careers, this team may become even more dominant. With the United States aside though, what other countries pose threats to the United States's throne?


I think that the biggest threat to the US is not a nation that has already displayed dominance. Rather, I think i…
Post a Comment
Read more

EndLineSports
Hi! Welcome to EndLineSports! I started this blog to make a sort of platform to share my love of sports in the form of amateur journalism! Thanks for stopping by and I hope you enjoy my work! Follow @endlinesports on Twitter!